Let’s get to know this gorgeous California native

Brooke’s MLB stud is a pitcher for the Milwaukee Brewers. Burnes was born October 22, 1994; the Bakersfield, California native played baseball at Centennial High and was named co-MVP of the Southwest Yosemite League as a senior. He was also a three-time academic honoree at Centennial.

He continued to play college baseball at Saint Mary’s College of California and was subsequently picked by the Brewers in the fourth round of the 2016 Major League Baseball Draft.

The Brewers shifted Burnes to the bullpen from the starting rotation in mid-June, after the 23-year-old right-hander had pitched to a 4.96 ERA over 69 innings and 13 starts for the Sky Sox. 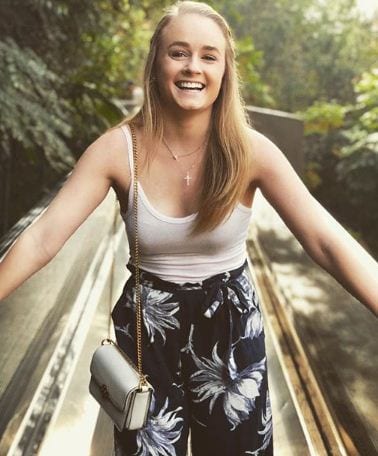 The 6-foot-3, 205-pounder is currently in a relationship with the petite, Brooke Charlotte Terrio. The blonde is definitely a source of support to Corbin, she wrote on Facebook for his debut

“I could not be anymore proud of all of your hard work, humility and dedication. I feel so unbelievably lucky to have gotten to be by your side for your debut. I love you Corb❤”

The blonde who is also a California native, is the daughter of Nancy McDermott . She has one brother –Luke Terrio. Brooke is an Experienced Assurance Associate at RSM US. According to her LinkedIn, Brooke Terrio attended University of San Diego and graduated in 2017 with a degree in Accounting. At USD she was a student ambassador, Alpha Phi member and part of the Accounting Society.

She is a former fitness camp instructor at TERRIO Physical Therapy-Fitness, Inc. In 2015 she worked at Jeff Wiebe as an accounting intern. In 2016 she took a position at CBIZ MHM, LLC –as an audit and tax intern.

Looking for more on the lives, lives and (sometimes) scandals of Major League Baseball’s Hottest Wives and Girlfriends? We’ve got you covered in our popular reader posts here