Krystal Almora is the proud wife of MLB player, Albert Almora Jr. -currently a player with the Chicago Cubs.

Krystal’s hubby was taught to play ball at age three by his father -who played ball in Cuba before deflecting to the US.

Almora Jr. played at Mater Academy Charter School in Hialeah Gardens, Florida and committed to play college baseball at the University of Miami.

However, he was selected in the first round of the 2012 Major League Baseball Draft by the Chicago Cubs -out of Mater Academy Charter School. He got the sixth overall selection.

Almora spent the next four seasons playing in minor league teams. He made his MLB debut for the Chicago Cubs in 2016 helping them to become the World Series Champions the same year. That was a big year for Albert who also became married to the lovely, Krystal Gregorio and also became a first-time dad. 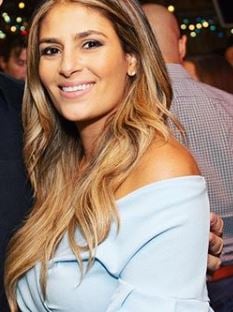 Krystal Gregorio a Philadelphia, Pennsylvania native, and Almora tied the knot on July 21, 2016. Since then, the couple has extended the family adding two children. Krystal Almora gave birth to the couple’s first child, son AJ, in August of 2016. She gave birth to their second child, another son, Antino in 2018.

The stunning MLB wag and mom of one has gained quite the notoriety after becoming the official Mrs. Almora. But Krystal is actually an athlete herself. The brunette is a former NBA and NHL dancer. According to her LinkedIn page, she served as a Sixers dancer from 2011 to 2014. In Between, she also worked as a Sales & Marketing Coordinator at Valley Forge Caisno Resort from 2013 until 2015.

She returned to dancing in 2015 when she signed up to be a Philadelphia Flyers dancer. Krystal holds a bachelor’s degree in Communication and Media Studies from Widener University. In addition, the has also showed interest in a number of causes including Animal Welfare and Human Rights.