Sandra Beltre is the lovely MLB wag happily married to Adrian Beltre. Her husband is currently a player with the Texas Rangers.

Her Dominican man was born April 7, 1979. Beltre has been around for a while. He’s played with the Dodgers, the Seattle Marines, the Red Sox and for the last six years with the Rangers.

Adrian Beltre started his baseball career while attending Liceo Maxino Gomez High School. He was spotted by the scouts from Los Angeles Dodgers.

He signed with the Los Angeles Dodgers in 1994, at the age of just 15, becoming the youngest player to be signed by a National League team.

After spending the first 7 years of his career with the Dodgers, he played for the Seattle Mariners from 2005 to 2009, then spent a season with the Boston Red Sox before joining the Texas Rangers in 2011.

The star third baseman was named to 3 consecutive All-Star games from 2010 to 2012 and has also won 4 Gold Glove Awards between 2007 and 2012. He won his fifth Gold Glove earlier this year.

Beltre has been a player with little controversy but on Wednesday the 38-year-old who was 3-3 on the night as he inched closer to 3,000 hits, was kicked out in the 8th inning.

His mistake? He wasn’t standing in the on-deck circle. The umpire instructed him to get into the circle, but opting to have a bit of fun instead, Beltre move the circle a few feet.

Luckily for Adrian there is always standing on his side, that would be his lovely wife. Meet her below. 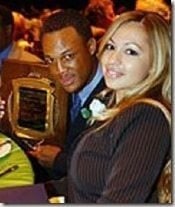 Sandra Beltre, also a Dominican native, has been married to Adrian since 2003. The marriage of 14 years has welcome three children together.

Adrian and his wife are known for their taste in real state. The couple has homes in southern California, in Santo Domingo, Dominican Republic, Dallas, TX and Pasadena, CA.

But their lifestyle is no problem for her hubby, who’s estimated net worth,  according to The Richest, is of $125 million.