Adam’s wife is well remembered as a member of the gold medal-winning Olympic softball team in 2004. She currently serves as an ESPN analyst.

Born November 11, 1980; the California native attended Adolfo Camarillo High School, where she was named the Los Angeles Times Player of the Year in 1998. She was also the MVP of the school’s basketball team during her junior and senior years.

The softball player became a four-time First Team All-American at Stanford University, where she played from 1999 to 2002. She left Stanford as the holder of numerous Cardinal records including career batting average, hits, home runs and stolen bases.
She graduated with a Bachelor of Arts degree in American Studies in 2002 and a Masters in Social Sciences in Education in 2003.
She arrived to ESPN in 2007 and was named officially to the Sunday Night Baseball team as an analyst in 2016.
Prior to her work with ESPN, Mendoza was a field reporter for Yahoo! Sports at the 2010 Winter Olympic Games and also served as the lead college softball analyst on FOX Sports. In addition, she is an advisor for the NY Mets. 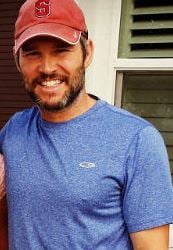 Jessica is married to hubby Adam Burks, together they have two sons, Caleb and Cayden. The couple has been married since 2006.

Adam Burks graduated from Eastern Washington University, and is also a former athlete himself playing a number of sports while in high school. After graduation he became a Marine and even served in Operation Desert Storm in Iraq.
The U.S. Marines veteran later worked as a civil engineer and later quit his job to care for the couple’s children.

Adam Burks is currently a stay at home dad, the arrangement has worked since the birth of the couple’s first son in 2009. At the time Mendoza was playing professionally so they came up with the role-reversal plan. She said during an interview “it’s awesome for me to know that if I’m gone, they’re with their dad”
Unlike his wife, he is a lot more private and enjoys a low profile.