Erica Stoll is the lovely wife of professional golfer, Rory McIlroy. Her Irish hubby has been wowing crowds for over a decade. He is perhaps best known for becoming the youngest player to win a PGA Tour playoff.

Rory turned pro in 2007 and became the youngest player to rank among the world’s Top 50 golfers. Born in Northern Ireland in 1989, he grew up in Ireland with his parents Gerry and Rosie McIlroy and started playing as early as a 2-year-old.

He won his first major, the U.S. Open, in 2011, breaking records held by Tiger Woods and Jack Nicklaus with a score of 268. McIlroy took home his second major title at the 2012 PGA Championship, becoming the youngest PGA Tour playoff winner to date.

McIlroy began competing when he was a child, and scored his first notable international win in the 9 to 10 age division at the World Championships in Miami, Florida.

In 2004, McIlroy was on Europe’s winning team at the Junior Ryder Cup, and he played in his first professional event, the 2005 British Masters, at age 15.

In 2014, McIlroy won the 143rd British Open championship. He continued his streak by winning the 2014 U.S. PGA Championship, his fourth major. Rory spent 95 weeks as the world number one in the official World Golf Ranking.

On the romantic side he was famously engaged to Caroline Wozniacki. In 2011, McIlroy began dating Wozniacki, a tennis pro from Denmark. They announced their engagement on New Year’s Eve 2013, but called it quits in 2014 just months before their planned November wedding. 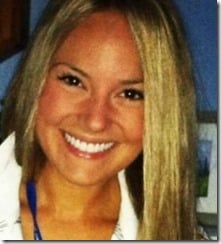 He began dating Erica Stoll in 2015. The couple became engaged in December 2015 while on vacation in Paris. They became husband and wife last April.

Erica Stoll is a former PGA employee. She was working for the PGA when the two met. At the time she was the manager of Championship Volunteer Operations at the PGA of America.

They actually have history together. It was Erica, the PGA official, who in 2012 came for Rory before police rushed him to the course while at that year’s Ryder Cup in Medinah. Rory nearly ruined his participation after he missed his alarm. 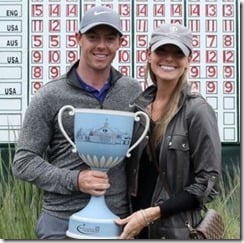 Erica hails from New York but lived mostly in Palm Beach Gardens in Florida. She is two years older than Rory.

Though she understands the pressure of the job for her hubby and just how successful he is, the blonde prefers to keep a low profile. She is often seen at tournament cheering for him but does not give interviews.

The two wedded on April 21, 2017. Their wedding was attended by a star studded-guest list including, soul legend Stevie Wonder, Coldplay’s Chris Martin and One Direction’s Niall Horan.

Rory has given a pretty good picture on what it is he loves about Erica, saying

I found it refreshing being with someone who was living a normal life rather than, ‘Oh! My jets is 30 minutes late!’

A clear remark on why he also ended his relationship with Caroline Wozniacki. He continued to praise Erica Stoll saying

“I could speak to her about anything, we ended up spending a bit of time together and realised that there was something more there. “I love that she knows everything about me, and there was no judgement there.

“There was no judgment from day one, which is huge, because that’s very hard to find for someone in my position.”

When her hubby is not on the road, the couple split their time between America and County Down, Northern Ireland.