Sybi’s husband is a nine-time PGA Tour winner with career earnings topping $46 million. However, reports say he is a cheap ******* who only gave his caddie 5k following a win at the Mayakoba Classic in Mexico –only a fraction of Kuchar’s $1.296 million winner’s prize.

He was a member of the Nationwide Tour before he earned his Tour card for the PGA Tour. Kuchar who used to play practice rounds with Tiger Woods –has been happily married to wife, Sybi for years now.

The couple tied the knot in 2003 and together are the proud parents of two teenage boys, Cameron and Carson.

Sybi Kuchar was born Sybi Parker, the Georgia native is a former college athlete. Sybi knows all about being competitive in sports, in fact, she played tennis while attending Georgia Tech. Sybi –a former Yellow Jacket tennis player –met her future husband while they both attended Georgia Tech, however started dating only after they graduated around 2000. 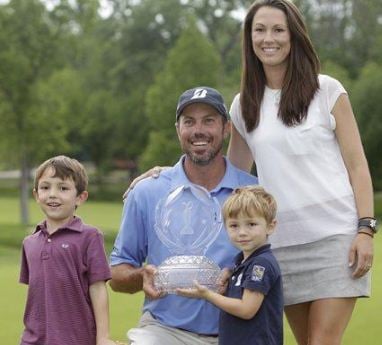 The couple certainly keep both sports alive, back in 2009 she and her hubby teamed up to win the consolation title in the USTA National Husband/Wife Doubles Championship.

Sybi Kuchar who has been a long-time presence on Tour, happens to be  also skillful as a golf wag, last year, Sybi wound up caddying for Zach Johnson over the final four holes Thursday after Johnson’s usual caddie, Damon Green, had to get an IV for dehydration.

When not supporting her husband on tour or being a busy mom, Sybi Kuchar does charity. She is one of the top supporters of Camp Twin Lakes, a charity that provides for special needs children with serious illnesses and mental/physical disabilities.