Jillian Wisniewski is the proud girlfriend of PGA tour player, Justin Thomas. The pretty golf wag must be in cloud nine right about now after her boyfriend of years won his first major championship over the weekend.

Thomas who graduated from St. Xavier High School and played college golf at the University of Alabama, turned pro in 2013, since then he’s earned five PGA Tour victories under his belt.

In 2015, Justin captured 7 Top 10 finishes, 15 Top 25 finishes, and was named runner-up for PGA TOUR Rookie of the Year. He achieved his second win at the CIMB Classic, followed by back-to-back wins and the SBS Tournament of Champions and the Sony Open. He’s also captured a career-high 7th in the Official World Golf Rankings, 1st on the FedEx Cup Points List, and 2nd on the Official PGA TOUR Money List.

But what young and successful athlete would be complete without a girlfriend? That’s Thomas’ case, he seems to be on top of the world with his first championship win and hot Jillian Wisniewski by his side. 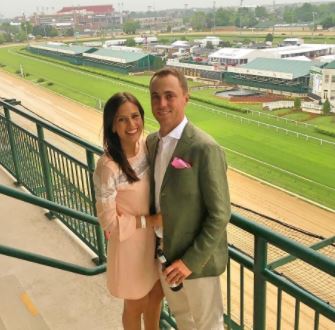 Born Jillian Grace Wisniewski in 1993, she is the daughter of Bruce and Rose Wisniewski. She has one older brother, Mark and one younger brother, Joseph.

Jillian graduated from the University of Kentucky in 2015 and holds a degree in journalism. Following her graduation she’s worked at Mcgarrybowen Chicago. She is currently listed as the production business manager.

Miss Wisniewski is much more private than her famous beau. She keeps her social media set on private and the gal enjoys a low profile. However, she can be seen in several photos on Thomas’ IG page. The two seem to enjoy traveling together and hang out with the likes of Jordan Spieth, Rickie Fowler, Allison Stokke.

Jillian Wisniewski and Thomas spent 4th of July together and also made a stop at the Kentucky Derby in early May.

You can check out her LinkedIn profile here.