Annie Verret is the hot golf wag dating professional player Jordan Spieth. The two lovebirds have been dating for years and miss Verret has remained loyal to Spieth through ups and downs.

The PGA Tour Rookie of the Year in 2013 who earned his first professional victory at the John Deere Classic. He won the 2015 Masters Championship, setting a tournament record for best 36-hole and 54-hole scores at 14-under and 16-under, respectively, before finishing the event at under-18. He also won the 2015 U.S. Open.

Before turning pro in 2012, Spieth helped capture an NCAA Championship while playing at the University of Texas and was named a first-team All-American as well as the Big 12 Freshman and Player of the Year.

In 2015 Jordan won the FedEx Cup Champion and finished the season number one in the Official World Golf Rankings and was unanimously named 2015 Player of the Year.

There’s no doubt of Annie’s talented golfer boyfriend so now lets get to the good stuff. Meet Annie Frances Verret in her top facts below. 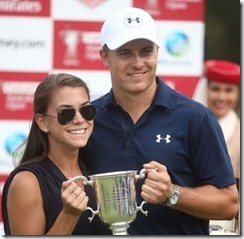 1. She is his childhood sweetheart

Annie Verret has cheered him on from the galleries during some of his biggest career wins. They met at high school in Texas and despite going to separate colleges, they have stayed together ever since.

2. She is a career woman

Though Annie is undeniably pretty, she is not the traditional model wag. She is more of a career woman.

According to Ms Verret’s LinkedIn page, she attended Rawls College of Business at Texas Tech University where she made the Dean’s Honor Roll twice and the President’s Honor Roll four times.

3. She is a sorority girl

4. She works as an event coordinator

The 24-year-old is an event coordinator with the First Tee of Dallas, an organization that mentors young people through golf.

Both her Instagram and Twitter accounts are set to private and have just a few hundred followers. However, she does make regular appearances on Jordan’s social media accounts.

Annie is always ready to congratulate her beau. They’re often pictured sharing tender moments like the one in 2015, when she sealed the deal with a memorable kiss at Augusta after Jordan’s historic victory at the Masters.

7. The two live together

In 2015, Spieth bought a 16,655 square foot home for $7.1 million in the Dallas area. The house includes a golf-simulator, an indoor basketball court, a gym, a swimming pool, a games room and a 12-car underground garage.

Aren’t they adorable! For sure one of the hottest couples in the PGA Tour.