June Jenkins is the wife of legendary golf write and novelist, Dan Jenkins –who died aged 89 earlier this week.

June’s husband is widely known for his long career as a sportswriter, he covered more than 230 major championships and was inducted into the World Golf Hall of Fame in 2012.

Born December 2, 1929; Dan began his career, in 1948 when he was hired by the Fort Worth Press as a high school student.

He covered his first major at the 1951 U.S. Open during which Ben Hogan shot a final-round 67 to win the title. Decades later, Jenkins said it was one of the greatest rounds he’d seen. In 1955, Jenkins finished second in the Fort Worth city championship. In 1962, he was hired by Sports Illustrated, where he chronicled the feats of Jack Nicklaus and Arnold Palmer.

Jenkins would move to Golf Digest in 1985, where he’d spend the rest of his career while writing several books and winning the most prestigious awards bestowed upon sports journalists, including the PGA Lifetime Achievement in Journalism Award presented by the PGA of America.

Jenkins is survived by longtime wife June, two sons and one daughter. 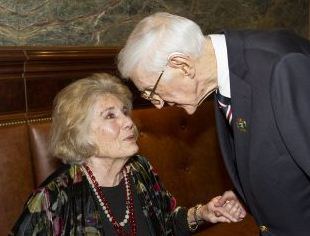 87-year-old June Jenkins was born June Burrage. According to People, she attended Fort Worth’s Paschal High and her father was an oilman. Dan and June met in junior high. The two married other people and reunited when Dan was 30-years-old.

Dan was married twice before and June was married for eight years to her first husband. Dan and June Jenkins were finally married in 1960.

The longtime spouse is said to have always supported his career and is described as the one who ‘saved’ him from chasms that come with money and Hollywood. In Tom’s tribute to Dan, he also hints at the couple’s blissful marriage writing ‘There might have been a husband somewhere who loved his wife as much as Dan Jenkins loved June Jenkins, but it’s hard to imagine.’

June Jenkins attended Texas Christian University –where she was a homecoming queen. Together they opened Juanita’s, the Tex-Mex restaurant on New York’s Upper East Side in early 1984.

Both Danny and Marty are entrepreneurs while Sally Jenkins is a successful sports columnist for the Washington Post.

During his speech at the 2012, World Golf Hall of Fame induction ceremony Dan said about his wife, “The first person I want to thank, quite serious, everything I’ve had that’s been good in my life has come to me through the incomparable June Jenkins, who’s my bride of 52 years, my sweetheart, my secret weapon actually.”