Amy Mickelson is the longtime wife of pro golfer, Phil Mickelson -considered one of the most accomplished golfers in the history of the game. He is also an entrepreneur and philanthropist.

Amy’s hubby recently made history becoming -at 50 -the oldest champion in major history amid moving scenes at the US PGA Championship.

Mickelson has 44 career PGA TOUR wins, which ranks ninth all time. He spent 26 years inside the top 50 of the Official World Golf Rankings. He has represented the United States in 24 team tournaments, which includes 12 Presidents Cups and 12 Ryder Cups, both American records.
Amy Mickelson is a popular figure in pro golf, the longtime golf wag is always seen showing her support to her hubby during matches and tournaments. Meet her in her top facts. 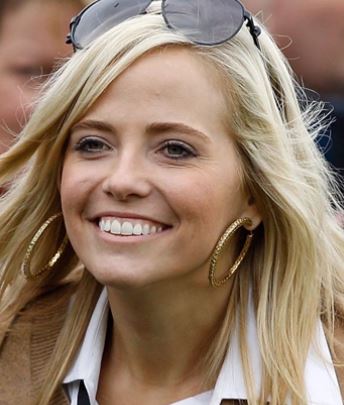 1. Amy Mickelson is a former cheerleader

2. She met her hubby at Arizona State

Amy met her husband in 1992 when he was a senior at Arizona State, a year after he won his first PGA Tour event as an amateur. Phil was a college star and Amy was a junior.
At the time Amy admits she knew nothing about golf revealing during an interview: “When he told me he was a pro golfer, I thought he worked in the shop at a golf course.”

The two became engaged in 1996 and became husband and wife later that same year. The couple are proud parents of three children; daughters Amanda and Sophia and a son, Evan.

Their first child Amanda, was born the day after the 1999 U.S. Open at Pinehurst No. 2, where Mickelson carried a pager and promised to leave if his wife went into labor.
Contractions began on Sunday, but she decided not to tell Mickelson as he tried to win his first major. He lost by one stroke when Payne Stewart holed a 15-foot par putt on the final hole, and Mickelson arrived home in time for the birth.

Sophia was born in 2001. Their middle daughter Sophia fainted and suffered a small seizure while at school when her father Phil Mickelson was playing in the Humana Challenge in La Quinta. When this happened, Amy said about the scary incident:

“It’s been a rough week,” “But you get through it. She’s been a trouper. She’s held up pretty well.”

Sophia returned to school quickly and Amy emphasized that their middle child was doing fine.

Evan was born in 2003. Due to complications at the birth, Amy ruptured an artery and Evan was not breathing for a while, but fortunately both pulled through.

Amy is a breast cancer survivor; she was diagnosed in May 2009. In order to support his wife, Phil suspended his participation on the PGA Tour. He returned to golf in 2010 at the Masters where her husband would win his third Green Jacket.

After an 11-month battle, Amy beat cancer and has a clean bill of heath. Because of this close shave, Amy has been heavily involved in fund-raising efforts for breast cancer research.

5. She keeps busy with the couple’s foundation

The pair set up the Phil and Amy Mickelson Foundation in 2004 and their goals are to give support to youths and families through a variety of initiatives.
It has also raised money for military charities as well as relief for those affected by Hurricane Harvey.
Also in 2004, Phil and Amy joined forces with the PGA Tour to create Birdies For the Brave, which is the PGA Tour’s national military outreach platform.